This page is in memory of the WDDO Certified K9’s who have passed on.

K9 Jagger, a black German Shepherd, was sprung from the Chatsworth Pound in California at the age of three, where he was a four-time repeat offender for being an ill-mannered escape artist. After three weeks of intense obedience training, Jagger became a happy, loving, sweet, gentle and spoiled house pet. Being a German Shepherd, he had strong working desires, so when the concept of Elite K9 Bed Bug Hunters was designed, k9 Jagger made sure he was the first hire. K9 Jagger started his bed bug detection career at the ripe age of ten, and not only did he embrace it with gusto, he excelled at his job with exceptional reliability and amazing finds. Jagger was humanly euthanized on 11/6/2017 due to lung cancer. Elite K9 deeply mourns the devastating loss of this sweet and talented boy

Gretchen was born March 3rd 2009. She served Alliance Fire Department from 2010 till she passed away in November 2015. She did over 200 fire scenes in the short time she was with the department. She was one of the first ADC in the public sector of North East Ohio. She will be missed.

Kip was a Christmas present for me as a 10-week-old puppy in 1994.  He was energetic and in typical Border Collie fashion, had boundless energy.  I had no idea at the time Kip came into my life that he would teach me how to become a dog trainer and would develop into a top arson dog.  Kip began his career in 1999 and served as an arson dog in both the state of Florida and the state of Alabama until retiring in 2005. Kip worked hundreds of fires involving vehicles, residences, industrial and commercial structures and public facilities.  Kip’s accuracy record remained at above 90% throughout his career. Kip passed away at the age of 15 as a result of complications from age related issues. I sat on my lawn and held Kip in my lap as he passed away. 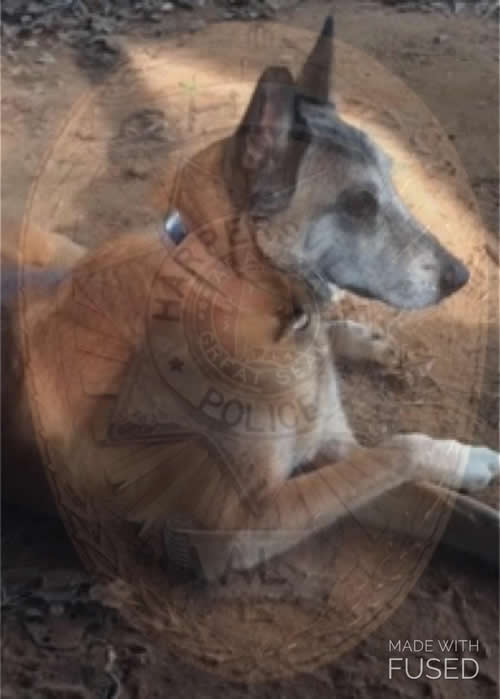 Tatsa served her community as a narcotics detection and patrol dog from 2006 until I retired in 2015.  Tatsa rode with me a a patrol office and continued to serve after I made Chief. Tatsa searched vehicles, schools, served search warrants in residences, businesses and other circumstances.  Tatsa made several drug cases during her career and kept me out of numerous struggles with suspects. Tatsa participated in the same double blind study that Midnight participated in at Auburn University.  Tatsa established a 94.5 percent accuracy rating in detecting the presence of narcitics. Tatsa passed away as a result of a neurological degenerative disorder in 2017. I patted Tatsa’s head and stroked her body as she lay on the table at the vet’s office and passed away.

Midnight and I met in a shelter in Sylacauga, Alabama in 2005.  I was looking for candidate to train to relieve Kip, my first arson dog.  She and I made eye contact and I just knew. Midnight established a reputation of being one of the most accurate and reliable arson dogs in the state of Alabama.  Midnight participated in a study at Auburn University where she established a 96.8 per cent accuracy rating in identifying the presence of ignitable liquid residues in a double blind study.  Midnight passed away at a ripe old age after a long and storied career as an arson dog. Midnight passed away in 2017 as a result of losing body function and excessive fluid on her lungs. Midnight passed away while I was out of town, but my wife, Kathy and my son, Jim were there to comfort her as she passed away.

Your focus on excellence in the canine field is commendable and would be a great asset to our community. apply now